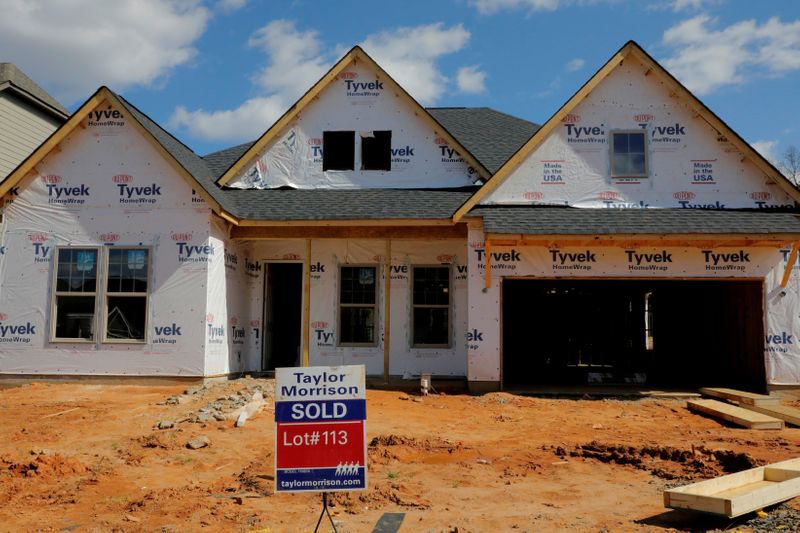 © Reuters. FILE PHOTO: A home under construction stands behind a “sold” sign in a new development in York County, South Carolina

WASHINGTON (Reuters) – U.S. construction spending rebounded far less than expected in March as strength in housing was offset by continued weakness in outlays on nonresidential structures and public projects.

The Commerce Department said on Monday that construction spending gained 0.2% after falling 0.6% in February.

The government reported last week that the economy grew at a 6.4% annualized rate last quarter. That was the second-fastest GDP growth pace since the third quarter of 2003 and followed a 4.3% rate in the fourth quarter.

Tepid construction spending likely has no impact on economists’ expectations for double-digit GDP growth in the second quarter, fueled by massive fiscal stimulus and improving public health as more Americans get vaccinated against COVID-19.

Spending on private construction projects rose 0.7% in March, lifted by investment in single-family homebuilding. There is strong demand for housing but supply has lagged amid expensive building materials as well as land and labor shortages. That followed a 0.3% drop in February.

Spending on residential projects surged 1.7% in March after edging up 0.1% in February.

But outlays on private nonresidential construction like gas and oil well drilling fell 0.9% in March. Business investment in nonresidential structures fell in the first quar