Sule is under contract until next year and Bayern manager Hansi Flick says it is up to the defender to decide “where he sees his future”. (Metro)

Borussia Dortmund are willing to drop their asking price for 20-year-old England forward Jadon Sancho by £20m to £88m to reignite interest from Manchester United. (Bild, via Mirror)

Real Madrid agree a four-year-deal with 28-year-old Austria international David Alaba, who can play in defence or midfield and whose contract at Bayern Munich expires in the summer. (Marca – in Spanish)

Sheffield United owner Prince Abdullah says he got special permission to fly from Saudi Arabia to England to tell manager Chris Wilder his job is safe – even if the club are relegated. (Talksport)

John Terry and Patrick Vieira are among the contenders for the Bournemouth job following the sacking of Jason Tindall. (Mail)

Huddersfield are in talks to sign 30-year-old Senegal striker Oumar Niasse, who is a free agent after being released by Everton at the end of last season. (Sun)

Manchester United, Everton and Southampton have made an approach to sign Celtic’s 17-year-old Scottish goalkeeper Vincent Angelini, who is out of contract at the end of the season. (Tuttomercatoweb – in Italian)

Former Chelsea and Juventus boss Maurizio Sarri has turned an approach to become the new manager at Marseille. (Sky Sports)

Arsenal’s English midfielder Joe Willock, 21, says that he signed for Newcastle on a six-month loan because he hit it off with manager Steve Bruce on a video call. (Chronicle) 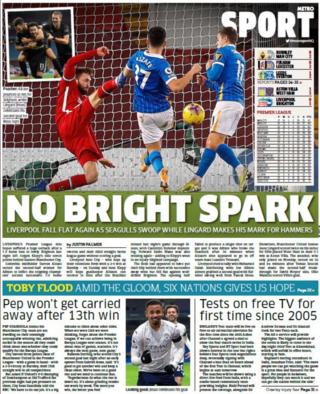 Thursday’s back pages – ‘No bright spark’