Napoli have made Arsenal’s Scotland defender Kieran Tierney a long-term target after missing out on the 23-year-old at the start of last season. (Telegraph – subscription required)

Manchester United are set to compete with Paris St-Germain for 22-year-old Brest and France Under-21 midfielder Romain Faivre. (Sun)

Everton are considering a move for 27-year-old Brazilian midfielder Felipe Anderson, who is on loan at Porto from West Ham United. (Teamtalk)

Chelsea are unwilling to let England midfielder Ross Barkley join Aston Villa – where he is on a season-long loan deal – on the cheap, with the 27-year-old still having two and a half years left on his contract. (Birmingham Mail)

Newcastle United remain a possible destination for Chelsea’s 23-year-old English defender Fikayo Tomori, who is set to go out on loan this month. (Chronicle)

However, the Magpies have given up on trying to sign English Manchester United left-back Brandon Williams, 20. (Northern Echo)

Spanish forward Brahim Diaz is set to leave AC Milan at the end of his loan period and return to Real Madrid, although the Italian club want to retain the 21-year-old. (Le10Sport – in French)

England winger Jadon Sancho admitted he has endured a tough season for Borussia Dortmund since his links with Manchester United throughout the summer, but the 20-year-old believes he’s now back to his best. (Manchester Evening News)

Manchester City midfielder Fernandinho’s agent has talked up the prospect of the 35-year-old returning to Brazilian side Athletico Paranaense when his contract with the Premier League club expires this summer. (Globo Esporte – in Portuguese)

Fenerbahce want £14m for Turkish midfielder Ozan Tufan with Crystal Palace and West Bromwich Albion both interested in the 25-year-old, along with Russian side CSKA Moscow. (Hurriyet – in Turkish)

Southampton forward Dan N’Lundulu, who has represented England at youth level, is a target for Real Betis. The 21-year-old has 18 months left on his contract. (TodoFichajes – in Spanish) 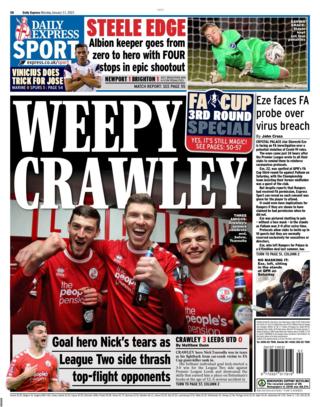