Manchester City are to end their pursuit of Inter Milan’s Argentina forward Lautaro Martinez, as the 23-year-old is expected to sign a new deal with the Serie A side. (Eurosport)

Jurgen Klopp is frustrated with Liverpool’s transfer policy after the club did not try to sign Senegal defender Kalidou Koulibaly, 29, from Napoli in January. (Sun)

Bayern Munich chairman Karl-Heinz Rummenigge says it would be “an honour” to sign Liverpool’s Mohamed Salah but insists the club have no imminent plans to move for the 28-year-old Egypt forward. (ON Time Sports via Mirror)

Real Madrid captain Sergio Ramos has rejected the offer of a new two-year contract and plans to join another European club on a free transfer at the end of the season. (Cope – in Spanish)

Manchester United will wait until the end of the season before opening contract talks with Norwegian boss Ole Gunnar Solskjaer, whose current deal expires at the end of 2021-22. (Sun)

Real Madrid are favourites to sign Bayern Munich and Austria left-back David Alaba, 28, with Chelsea unwilling to meet the defender’s wage demands of £400,000 per week. (ESPN)

AC Milan are set to open talks with Sweden striker Zlatan Ibrahimovic, 39, on a new contract that would tie him to the club until he was 41. (Sun)

Manchester City will open contract negotiations with John Stones, 26, this summer in recognition of the England defender’s role in their title charge. (Times – subscription required)

Crystal Palace are unsure whether to offer manager Roy Hodgson, 73, a new contract for next season. The former England boss’ current deal expires in the summer. (Mail)

Newcastle United’s English forward Dwight Gayle, 31, is frustrated at the lack of playing time at St James’ Park and could leave on a free transfer when his contract expires in the summer. (Chronicle)

Sweden goalkeeper Robin Olsen, 31, wants to convert his loan move from Roma to Everton into a permanent deal. (Goal)

Manchester City manager Pep Guardiola is considering letting Brazil goalkeeper Ederson, 27, take penalties – his team have missed three of the seven spot-kicks they have been awarded this season. (Independent)

Former Manchester United defender Gary Neville says his old club need to sign a centre-half and a full-back in the summer. (Sky Sports, via Goal) 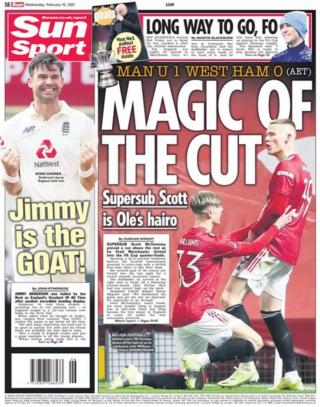 The back page of The Sun