Manchester United will sell France midfielder Paul Pogba, 27, in the summer after accepting that he will not sign a new contract. (Sunday Mirror)

Atalanta are keen on loaning 18-year-old Ivorian winger Amad Diallo to Manchester United for the rest of the season. (Manchester Evening News)

Diallo has the paperwork to complete his move to Manchester United but Atalanta coach Gian Piero Gasperini says the club have made a late plea to keep him. (Star on Sunday)

William Saliba is ready to take a pay cut to leave Arsenal, with a host of clubs expected to bid for the 19-year-old French defender in the January transfer window. (L’Equipe via Sport Witness)

Newcastle are among the clubs offered the chance to sign Leicester’s former England Under-21 midfielder Hamza Choudhury, 23. (Newcastle Chronicle)

Crystal Palace and Leicester are among the clubs interested in Schalke’s Turkish defender Ozan Kabak, 20. (Mail on Sunday)

France forward Olivier Giroud, 34 – who has been linked with West Ham -says he would like to stay at Chelsea and win trophies. (Sky Sports)

Stoke are in talks to sign Wales and former Manchester City winger Rabbi Matondo, 20, on loan from German side Schalke. (Mail on Sunday)

Barcelona presidential candidate Joan Laporta says he will not be drawn into naming potential transfer targets, unlike his rivals for the position. (Goal)

Arsenal have been linked with a move for Germany midfielder Julian Brandt, 24, in January but Borussia Dortmund sporting director Michael Zorc says there has been no contact. (Bild via Goal)

Chelsea boss Frank Lampard has asked fans to be patient over the form of Germany midfielder Kai Havertz, 21, who joined from Bayer Leverkusen in September. (Sunday Telegraph)

Barcelona coach Ronald Koeman thinks some of his players should leave in search of regular football. (Sport)

Koeman says he has no regrets at seeing Luis Suarez leave Barcelona, claiming the decision to let the 33-year-old Uruguay striker join Atletico Madrid in September was taken by those above him. (Goal)

Inter Milan have offered former Tottenham midfielder Christian Eriksen to Real Madrid and Atletico Madrid. The Dane, 28, has also been linked with a move to Paris St-Germain. (Marca) 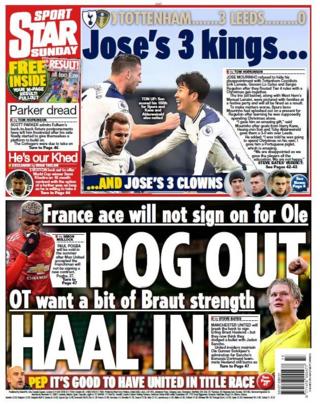 Star on Sunday back page