Juventus have rejected an £86m bid from Liverpool for Italy winger Federico Chiesa. The 23-year-old joined Juventus on an initial two-year loan in October 2020 before a potential permanent move from Fiorentina.(Repubblica)

Arsenal, Tottenham and Everton are all considering a move for Argentina forward Joaquin Correa, 26, who is expected to leave Lazio this summer. (Corriere dello Sport)

France forward Antoine Griezmann, 30, would only be willing to leave Barcelona if he could return to former club Atletico Madrid. (Sport)

Juventus vice-president Pavel Nedved says Portugal forward Cristiano Ronaldo, 36, will stay with the club. Ronaldo has one year left on his contract with the Serie A side and has been linked with leaving them. (Sky Sports Italia, via Football Italia)

PSG and Netherlands midfielder Georginio Wijnaldum, 30, says he “didn’t feel loved” and was singled out for social media criticism before his departure from Liverpool in June. (Observer)

England captain Harry Kane, 27, is to miss start of Premier League season after his exertions at the European Championship. The Tottenham forward favours a move to Manchester City.(Telegraph)

Arsenal hope to confirm the £50m signing of England defender Ben White, 23, from Brighton after his medical this weekend. (Mail)

The Gunners are also looking at the possibility of signing Switzerland midfielder Denis Zakaria, 24, who has expressed a desire to leave Borussia Monchengladbach. (Mirror)

Crystal Palace are closing in on a £20m move for Lyon and Denmark defender Joachim Andersen, 25, and remain in talks over a deal for Schalke and Turkey centre-back Ozan Kabak, 21. (Mail)

Watford have had a £15m bid for Adam Armstrong, 24, turned down, with Blackburn holding out for £25m for the former England Under-21 forward. (Sun)

The Hornets’ long-serving captain Troy Deeney, 33, was called ‘Tom Deeney’ on the teamsheet for Saturday’s friendly against West Brom. (Sun) 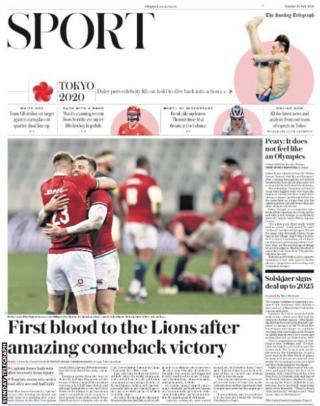