Lionel Messi, 33, has told Neymar he is planning to leave Barcelona in the summer and join Paris St-Germain, with the Argentina striker also a target for Manchester City. (Star)

Manager Steve Bruce is keen for Newcastle to sign an English trio of Manchester United players on loan this month and has spoken at length with his former club over left-back Brandon Williams, 20, defender Phil Jones, 28, and midfielder Jesse Lingard, 28. (90min)

Tottenham are in a strong position to land RB Leipzig midfielder Marcel Sabitzer, 26, but it is unlikely to happen this month. (Express)

Former England Under-20 midfielder Marcus Edwards, 22, has ended West Ham’s hopes of signing him in January by renewing his contract at Portuguese club Vitoria de Guimaraes with a £45m release clause. (Mail)

Burnley manager Sean Dyche has called for fast-tracked coronavirus vaccinations in football, with the money saved on testing being diverted to the NHS. (Guardian)

Leeds have identified three signings in the January transfer window and have the funds available to bring in new players, but their clubs are reluctant to sell. (Express)

Dutch midfielder Donny van de Beek should be banging on the door of Manchester United manager Ole Gunnar Solskjaer, according to the club’s former striker Dimitar Berbatov. The 23-year-old has started just two league games this season, having signed for £35m in September. (Betfair via Sun)

United’s Argentine goalkeeper Sergio Romero, 33, is expected to return to the club next week as discussions over his future continue. (Sky Sports)

Shrewsbury Town face having to forfeit their place in the FA Cup after their third-round match against Southampton was postponed following a number of positive coronavirus tests. (Guardian)

Juventus have been dealt a blow in their search for a new striker with Sampdoria’s Fabio Quagliarella, 37, ruling out a return to his former side. (Mail) 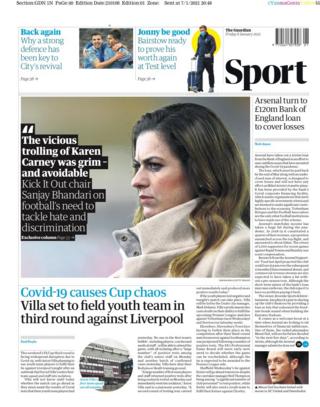