Brazil forward Neymar, 28, says that leaving Paris St-Germain “does not cross my mind”. (L’Equipe – in French)

Chelsea are one of four potential destinations David Alaba’s agent has identified for the Austria defender, 28, if he leaves Bayern Munich next summer. The others are Barcelona, Real Madrid and PSG. (Bild, via Sun)

Manchester United have doubts about whether Real Madrid or Juventus can afford to sign their France midfielder Paul Pogba, 27. (ESPN)

Jordi Farre says that if he wins the Barcelona presidential election on 24 January, Messi will sign a contract renewal the next day. (Sport – in Spanish)

Brazil striker Hulk, 34, is willing to take a 90% pay cut to seal a free transfer to the Premier League after ending his four-year spell with Shanghai SIPG. (Record, via Sun)

Wolves have been offered the chance to sign Hulk as a replacement for injured Mexico striker Raul Jimenez. (Football Insider)

Arsenal and Wolves are among a number of clubs watching developments with Valencia and Uruguay striker Maxi Gomez. The 24-year-old could be sold next year as the Spanish club look to raise funds. (Mail)

PSV Eindhoven’s Netherlands forward Donyell Malen, 21, is at the top of Borussia Dortmund’s list to replace Jadon Sancho if they sell the English winger, 20, next year. (Bild – in German)

Benfica have decided to send on-loan French defender Jean-Clair Todibo, 20, back to Barcelona in January. (Record – in Portuguese)

Benfica are also interested in signing French midfielder Boubakary Soumare, 21, from Lille. (A Bola – in Portuguese)

Wolves and Burnley are interested in Stoke City’s English striker Tyrese Campbell, but the Championship side have already told Rangers that the 20-year-old is not for sale in January. (Football Insider) 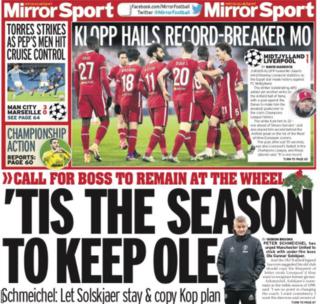