Paris St-Germain manager Mauricio Pochettino insists his club and players have not shown “a lack of respect” by speaking about their interest in signing Barcelona’s Argentina forward Lionel Messi, 33. (ESPN)

Manchester City will sign a new striker this summer whether they are successful in bringing in Messi or not, with Borussia Dortmund’s Norway forward Erling Braut Haaland, 20, a priority. (90 Min)

Belgium midfielder Axel Witsel, 32, USA forward Giovanni Reyna, 18, English midfielder Jude Bellingham, 17, and Haaland are among those who could be sold, with Dortmund desperate to raise funds. (Waz, via Express)

Chelsea boss Thomas Tuchel has refused to be drawn on speculation over moves for Haaland and RB Leipzig’s France defender Dayot Upamecano, 22. (ESPN)

Manchester City are close to completing a £15m deal for Fluminense forward Kayky, with the 17-year-old Brazilian joining City’s youth team when he can get a work permit in 2022. (Journalist Fabrizio Romano on Twitter)

Liverpool insist Mohamed Salah, 28, is not for sale after Bayern Munich executive Karl-Heinz Rummenigge said it would be an “honour” to sign the Egypt forward. (Sun)

Everton and Celtic are tracking the progress of 19-year-old Aston Villa and Republic of Ireland Under-19 winger Tyreik Wright, who is out of contract at the end of the season. (Mail)

The takeover of Sunderland by Kyril Louis-Dreyfus is nearing completion with the English Football League completing its final checks on the deal to acquire Stewart Donald’s controlling stake. (Sky Sports)

Udinese have not ruled selling Argentina midfielder Rodrigo de Paul, 26, in the summer following links with Liverpool in the January transfer window. (Goal)

West Bromwich Albion have decided not to offer a contract to Ahmed Musa after the 28-year-old Nigeria forward’s trial with the club. (Express & Star)

Aston Villa assistant manager John Terry is on a five-man shortlist to become the next permanent manager of Bournemouth. (Birmingham Mail)

Former Huddersfield boss David Wagner is set to be interviewed as Bournemouth look to confirm an appointment this week. (Sky Sports)

Former Nice manager and ex-Arsenal midfielder Patrick Vieira is among the front-runners to become the next Cherries boss. (TalkSport)

Wolves boss Nuno Espirito Santo says Mexico striker Raul Jimenez, 29, has made another “amazing” step in his recovery from surgery on a fractured skull in November. (Express & Star)

Shakhtar Donetsk’s 21-year-old Israel forward Manor Solomon – linked with Arsenal – has confirmed that a number of Premier League clubs have expressed an interest in signing him. (Goal)

Spurs are already planning a new loan move in England for English defender Malachi Fagan-Walcott, 18, who is on loan at Dundee. (Football Insider)

Barcelona are prepared to go the rest of the season without playing Brazil midfielder Philippe Coutinho so that they do not have to pay Liverpool the additional 5m euros (£4.3m) they would owe should the 28-year-old make five more appearances. (Star) 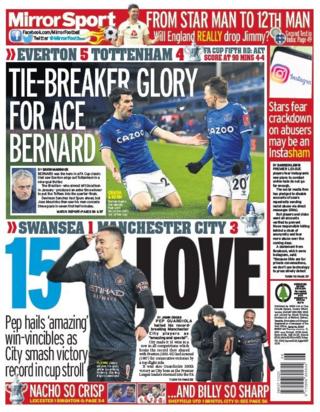