Arsenal have proposed a player-plus-cash deal for Leicester City and England midfielder James Maddison. The Gunners are said to be reluctant to pay the £60m asking price for the 24-year-old, so will offer a player as part of the bid. (football.london)

Inter Milan will reluctantly accept a bid of about £100m from Chelsea for Belgium striker Romelu Lukaku, 28, after officials at the club privately admitted they need to sanction one more high-profile departure this summer to balance the books. (Metro)

Lukaku is said to want to return to Chelsea as he feels he has unfinished business at Stamford Bridge. (Sun)

Spain defender Aymeric Laporte has made it clear to Manchester City that he wants to move to La Liga this summer, with Barcelona and Real Madrid keen to sign the 27-year-old. (90min)

Tottenham are close to a £47m deal for Atalanta star Cristian Romero after the Argentine asked to leave the Italian side. The 23-year-old was voted the best defender in Serie A last season. (Mail)

Liverpool, along with a number of unnamed Premier League clubs, are interested in signing Bournemouth’s Dutch forward Arnaut Danjuma, 24, who has already attracted a bid from Villarreal. The Cherries are said to be seeking a fee in the region of £21.5m. (Marca – in Spanish)

Aston Villa are hoping to tie up deals for Chelsea and England striker Tammy Abraham, 23, and former England Under-21s and Manchester United defender Axel Tuanzebe, 23. Both spent time on loan at Villa Park and helped the club achieve promotion to the Premier League in 2018-19. (Telegraph – subscription required)

Chelsea have offered 25-year-old Brazilian winger Kenedy to Sevilla as part of a deal to sign 22-year-old Jules Kounde after fellow France defender Kurt Zouma, 26, was initially offered in part exchange by the Blues. (Sun)

Portugal forward Cristiano Ronaldo still wants to leave Juventus for Real Madrid, but the 36-year-old knows his chances of a return to the Bernabeu rely on whether the Spanish club are successful in their pursuit of Paris St-Germain’s 22-year-old France forward Kylian Mbappe. (AS – in Spanish)

Premier League newcomers Brentford are closing in on a deal for Midtjylland’s 21-year-old Sweden midfielder Jens Cajuste, who has been linked with a move to Rennes. (Sportbladet – in Swedish)

Sweden striker Zlatan Ibrahimovic, 39, “tested the waters” about a potential return to Paris St-Germain before he agreed a new one-year deal with AC Milan. (Le Parisien – in French)

Everton are “very interested” in Lazio forward Joaquin Correa and are weighing up a €25m (£21.3m) bid for the Argentine forward. (Sport Witness)

Leeds United have competition in their bid to sign Netherlands Under-21 international Noa Lang. According to reports Spanish side Sevilla are also interested in the 22-year-old Club Bruges winger. (El Desmarque – in Spanish)

West Ham believe they only have a 10% chance of re-signing England international and former loanee Jesse Lingard from Manchester United. The 28-year-old, whose Old Trafford contract runs out next summer, is back in pre-season training with the Red Devils. (Sky Sports) 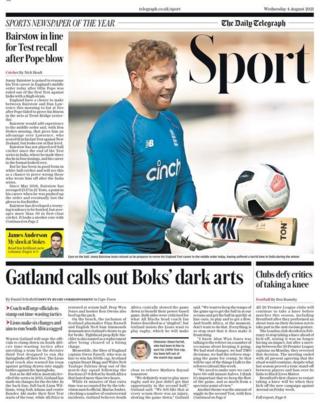