Liverpool are studying Aston Villa defender Ezri Konsa, 23, with a view to making a summer move for the England Under-21 international. (Athletic – subscription required)

France forward Kylian Mbappe, 22, has told Paris St-Germain he intends to see out the remainder of his contract, which ends in the summer of 2022. (Sport – in Spanish)

Manchester City and Germany midfielder Ilkay Gundogan, 30, says he wants to move into management once his playing days are over. (Goal)

West Ham and England midfielder Jesse Lingard says he “didn’t get his chance” at Manchester United when football resumed after the first coronavirus lockdown. The 28-year-old is on loan at the Hammers until the end of the season. (BT Sport)

The FA Cup and Carabao Cup finals are being lined up as test events for the return of crowds before major sporting events this summer. (Times – subscription required)

Chelsea are the only Premier League club to have offered a contract to Bayern Munich and Austria defender David Alaba. The 28-year-old’s deal expires at the end of the season and he is free to speak to other sides. (90min)

Southampton are interested in signing Angers‘ French midfielder Angelo Fulgini. The Saints tried to sign the 24-year-old in January. (Le10 Sport – in French)

Norwich have told Bayern Munich they will have to pay £30-35m if they want to sign English defender Max Aarons, 21. (Sky Sports)

England Under-21 midfielder Jamal Musiala, 17, is to sign a new five-year deal at Bayern Munich. (Guardian)

AC Milan are eyeing a summer move for 21-year-old Lens central defender Facundo Medina who is also a target for Manchester United. (Mail) 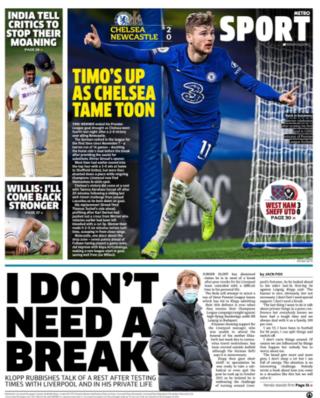 The Metro leads with Chelsea’s win over Newcastle