Tottenham would want an offer of at least £150m before they even consider selling England striker Harry Kane, 27. (Mail)

South Korea forward Son Heung-min, 28, whose contract at Tottenham runs until 2023, says it is a “bit unfair” to talk about if he will sign a new contract with negotiations having been paused because of the coronavirus pandemic. (Mail)

Arsenal want to sign Spain midfielder Dani Ceballos, 24, and Australia goalkeeper Mat Ryan, 28, on permanent deals this summer. The pair are currently on loan at the Gunners from Real Madrid and Brighton respectively. (Sun)

Bayern Munich fear France winger Kingsley Coman, 24, could be tempted to join Manchester United because of the wages on offer. (Bild, via Mail)

Barcelona could have signed Mbappe in 2017 but chose instead to buy 22-year-old French forward Ousmane Dembele from Borussia Dortmund. (Mirror)

Barcelona presidential candidate Joan Laporta has pledged to do “everything possible” to convince Argentina forward Lionel Messi, 33, to remain at the club. (Sky Sports)

France striker Alexandre Lacazette, 29, is one of several players Arsenal could sell this summer as part of a clear-out to cut costs. (Sun)

Atletico Madrid and Uruguay striker Luis Suarez, 34, says he will decide when the time is right to retire, but it won’t be for a few years. (ESPN)

There is no guarantee Netherlands midfielder Georginio Wijnaldum, 30, will secure a move to Barcelona should he leave Liverpool as a free agent in the summer, because of the Spanish side’s financial situation. (Liverpool Echo) 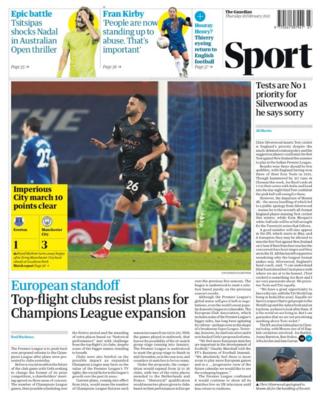