Barcelona have offered a contract to Argentina forward Sergio Aguero, 32, who is out of contract at Manchester City at the end of the season. (Tycsports – in Spanish)

Austria defender David Alaba’s agent has denied the 28-year-old, whose contract with Bayern Munich runs out in the summer, has agreed a deal to join Barcelona. (Goal)

Manchester United striker Edinson Cavani, 34, is going to wait until the end of the season before deciding his future, despite the Uruguayan’s father indicating he wanted to sign for Boca Juniors. (ESPN)

A potential contract extension for Cristiano Ronaldo is “not on the agenda” for Juventus right now, says the club’s sporting director Fabio Paratici. (Express via Sky Italia)

Real Madrid will listen to offers for defender Raphael Varane this summer. The France international, 27, is believed to be interested in a move to the Premier League. (AS – in Spanish)

Craig Dawson, 30, is three Premier League starts away from activating a clause that will turn the English defender’s loan at West Ham from Watford into a £2m permanent deal. (Athletic – subscription required)

Portuguese forward Eder is attracting the interest of Brighton with the 33-year-old set to leave Lokomotiv Moscow in the summer. (A Bola – in Portuguese)

Former RB Leipzig coach Ralf Rangnick says he would be interested in replacing Germany manager Joachim Low, who will leave the role after this summer’s European Championships. (Sky Sports) 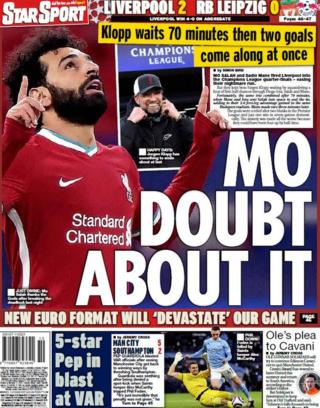