It felt like Arsenal played into Tottenham’s hands in Sunday’s north London derby, so the way the game turned out was hardly a surprise.

The Gunners looked nice and neat on the ball against Spurs but they never looked like they were going to hurt them.

That’s an ongoing problem for Mikel Arteta’s side, who have averaged more passes per shot than any other Premier League team this season – 55.5 – and have scored only 10 goals in 11 league games.

You could see that Tottenham were happy for them to keep the ball because they knew they did not pose much of a threat.

On the flip side, everyone who has watched Spurs this season knew their game plan would be to use Harry Kane and Son Heung-min to hit Arsenal on the break when the visitors’ attacks broke down.

So the goals the Gunners conceded, particularly the second one that finished off the game, were extremely naive.

I would imagine Arteta had been drilling it into his team how good this Tottenham team is on the counter-attack, and to be aware of it – to be organised and switched on in the transitions when they lose the ball.

Instead, it was schoolboy stuff from Arsenal. For Tottenham’s second goal, they got sucked into the ball and it was far too easy to play through them. There was no way back from there.

Aubameyang did not believe he was going to score

If you look at the league table, things appear pretty bleak for Arsenal right now, but I don’t think their situation is as bad as their position might suggest.

What is clear is that they are really struggling for confidence and, on top of that, the man that carried them at the back end of last season and got them some great results is not performing right now.

I am talking about Pierre-Emerick Aubameyang, who hit 22 league goals in 35 starts last season – but has managed only two in 11 so far this time.

Every striker suffers a drop in form at some point in their career, and there is no doubt Aubameyang is below his best right now.

His penalty against Manchester United on 1 November is the only time he has found the net since the opening day of the campaign.

He had a big opportunity against Spurs when he got on the end of Kieran Tierney’s cross at the start of the second half but he had no real conviction with his header. He just kind of guided it over the bar.

It was a header from a player who did not believe he was going to score, and I would say the same about his only other effort at goal on Sunday – a shot that was blocked by Toby Alderweireld late in the game.

Aubameyang never looked like he was going to get past Alderweireld, or even try to. The Spurs defender had full control of that situation, and that is also how you could describe the way Tottenham dealt with Arsenal for the entire match.

What do Arsenal lack in attack?

While Aubameyang is not the player he was last season, I don’t think you can say that is all his fault. The service he is getting is not the same either.

Against Tottenham, Arsenal’s game plan was essentially to get the ball out wide and put crosses into the box. Lots of them.

That meant they had Aubameyang and Alexandre Lacazette and, when he came on, Eddie Nketiah, trying to out jump Alderweireld and Eric Dier.

That was never going to happen very often, even before Spurs boss Jose Mourinho brought on an extra defender in Ben Davies. He added another when Joe Rodon came on before the end too. 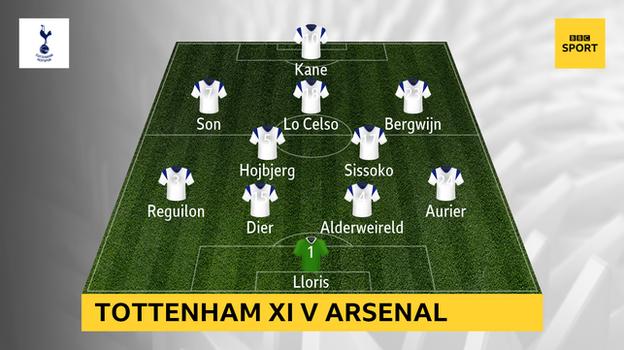 In the past, Arsenal have always had a bit more about them than that – more guile and more creativity. Arteta has to work out how to get that back.

At his best, Aubameyang is decent in the air but that is not the route to goal for Arsenal. They really want to be picking holes in teams, probing into the channels and trying to slide balls in behind defenders for their fast forwards. We did not see much of that against Spurs.

How do Gunners start firing again?

Reverting to a back four might be one way of increasing Arsenal’s attacking threat.

While they might have more control of the ball and see a lot of possession when they play with three centre-halves, they are still conceding goals. And they are clearly losing something at the top end of the pitch too.

It might be time for Arteta to get another body in a more attacking area instead, especially a more creative-minded player. For example, if you took out Arsenal’s third centre-half against Spurs, they could have had Reiss Nelson on the pitch. 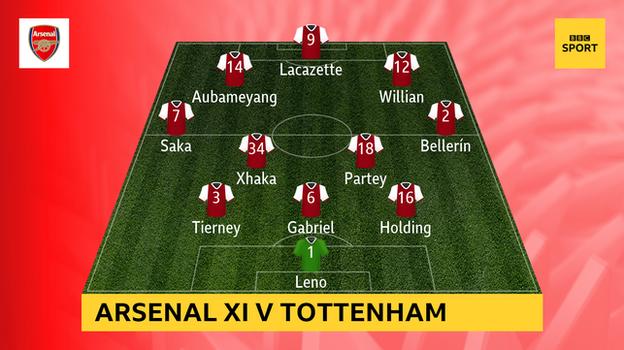 Arteta could argue that a 3-4-3 formation is a way of getting Tierney and Bukayo Saka together in the side, and I actually thought they were Arsenal’s best players against Spurs with their good work down the left.

One way or another, though, Arteta has got to tweak his approach.

He made an excellent start as manager, but at nearly a year into the job, it’s clear how much work he still has to do.

Arsenal do not come forward as fluently as everyone expects them to, and maybe that’s because Arteta has focused too much on the defensive side of things.

It has worked because they are not a soft touch anymore, but now he has to focus on getting their attacking edge back. It has clearly become an issue.