Jurgen Klopp says he doesn’t have enough players to rotate his Liverpool squad against Ajax, with Thiago Alcantara set to be out until 2021.

Klopp added that former Bayern Munich midfielder Thiago will be out until the new year with his knee injury.

“I don’t have enough players to prioritise,” Klopp said.

“It’s not about the competition; it’s about the players. On Saturday, the fittest players played.

“It’s not a perfect situation but obviously not enough people want to offer us any kind of help [with the fixture scheduling], not only for us but for [all] football people. We just have to deal with it.”

Thiago has not played since being injured in a challenge by Richarlison in a 2-2 draw at Everton on 17 October.

Captain Jordan Henderson is fit but Klopp confirmed that along with Thiago, Virgil van Dijk, Joe Gomez and Milner, Xherdan Shaqiri, Trent Alexander-Arnold and Naby Keita remain out of action.

“Thiago, we have to maybe clarify it a little bit,” said Klopp.

“On that day when Thiago got injured in that challenge in the Everton game, there was another bad injury [to Virgil van Dijk, who suffered cruciate knee ligament damage].

“But, as we realise now, it was still a massive impact on the knee. I can’t say exactly when he will be fine, but it will take a few weeks.”

Liverpool will qualify from Group D if they avoid defeat by Ajax and will be group winners if they win and Atalanta fail to beat Midtjylland.

‘Liverpool have 99.9% chance of going through’

Entertainment data company Nielsen’s Gracenote say Liverpool have a 99.9% chance of progressing to the knockout stages.

Simon Gleave, head of sports analysis at Nielsen’s Gracenote said: “Liverpool are dominating their group and there is only a one in a thousand chance they won’t be participating in the Champions League’s knockout stages according to the Euro Club Index. The Reds have a 99% chance of finishing the group stage on top of Group D.” 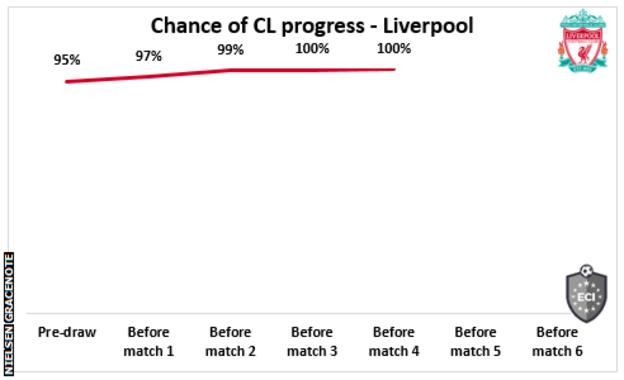