I wouldn’t write Liverpool off in the Premier League title race just yet – that would be silly with the quality they have got and the mentality this team has shown in the past.

But, although we are only just past the halfway mark of the season, Sunday’s game with leaders Manchester City has become a must-win game for Jurgen Klopp’s side if they are going to retain their crown.

Not only is it an opportunity for Liverpool to narrow the gap and regain some of the momentum they lost in Wednesday’s disappointing defeat by Brighton, a victory would also give other teams some confidence by showing that City are still beatable after racking up nine league wins in a row. 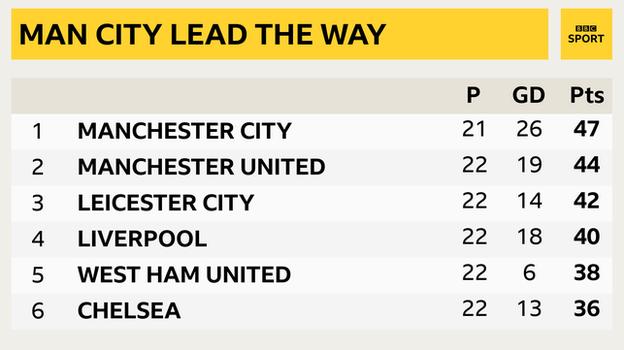 The way City are playing and the run they are on, that is clearly going to be tough. I don’t see many weaknesses with them at the moment, especially defensively where they have gone up a notch or two, maybe more.

If Liverpool can win at Anfield, it gives them hope and a chance of retaining their title. If they don’t, then it’s going to be almost impossible for them to catch City, and I am not sure anyone else can either.

I didn’t see this City run coming – I don’t think anyone did. It’s down to phenomenal coaching and great management from Pep Guardiola, and he and his players deserve great credit.

They were obviously aware of how many games they lost last season, and how many goals they conceded – and they have changed their philosophy a little bit because of that.

I have noticed they don’t press as high as often, and they are happy sometimes to sit off a little bit more now. Playing like that, with less intensity, is sensible game management anyway because of the number of games they have to play.

It is working because, generally, the full-backs don’t overlap and go high up the pitch. Instead, they play more inside. That gives them a more solid central spine – if the opposition go down the sides then that is fine, but they are not coming down the middle.

That area is more condensed anyway, because they are not playing with an out-and-out striker. Instead, they have lots of midfielders on the pitch, and they all want the ball.

Playing this way did not get them results earlier in the season, but they stuck at it. Now, they still might not make as many chances as they did in the past, but they are dominating possession and controlling games better than before.

Liverpool’s challenge is to try to disrupt that, and I think I know a way they can be less passive than they have been in recent matches.

Reds need to get their bite back in midfield

Of course Liverpool’s poor form in the past couple of months is worrying in terms of their title hopes this season, but I don’t think it is a long-term cause for concern.

They have had a huge amount of enforced changes in the team because of their well-documented injury problems, in what is a unique campaign with such a relentless fixture schedule.

Players have been moved from midfield to defensive positions, which affects the balance of the side. As I said on Match of the Day after the midweek Brighton defeat, that has meant the units and partnerships that were the cornerstone of Liverpool’s success in the past have been lost.

Last season’s strongest midfield three of Fabinho, Jordan Henderson and Georginio Wijnaldum have hardly played together as a unit in the Premier League in 2020-21 – just seven minutes of the opening-day win over Leeds.

When they play in their proper positions, they all know their jobs, and they work as a cog with the movement of the rest of the team. For example Henderson always covers for Trent Alexander-Arnold when he goes flying down the right wing.

I’d definitely bring Henderson back into midfield on Sunday, because they need him there. Yes, Klopp might have to put in one of his new centre-backs for that to happen, but otherwise what was the point of bringing them in?

Henderson brings leadership wherever he is playing but, in midfield, he gives them that energy and bite they have been missing in the middle of the pitch, which will be particularly important given the way City play and the possession they will enjoy.

An open game, or another cagey one?

Looking at the Reds’ upcoming fixtures, the tests keep on coming – first City, then Leicester, RB Leipzig in the Champions League and then Everton – all in the next fortnight.

I think they will relish that run of games, though. They thrive against better opposition and it’s always the bigger games with the most pressure that show the true quality of a team and a squad. It will motivate them even more.

City have a bit of a point to prove too, because they have not won at Anfield for so long, and even if they don’t need to go hell for leather because of their strong position at the top of the table, they always try to score goals.

That’s why I think it will be more open than some of the other big games we have seen recently, like Manchester United’s bore-draw at Anfield last month.

Liverpool need a win so badly this time they cannot just look to shut up shop, and with the players they are missing I am not sure they could keep City out a