City manager Pep Guardiola has made the 25-year-old English midfielder one of his major targets.

It is understood there has been communication between the two Premier League clubs throughout the summer.

City have made their move before Grealish returns to Villa for the start of pre-season training at Bodymoor Heath next week.

Guardiola feels Grealish can add an extra dimension to City’s attack and propel them to the Champions League title for the first time, which they missed out on last season when they were beaten in the final by Chelsea.

The fee, which would eclipse the £89m Manchester United paid for Paul Pogba in 2016 as the highest ever paid by an English club, underlines how keen Guardiola is to have Grealish in his squad. 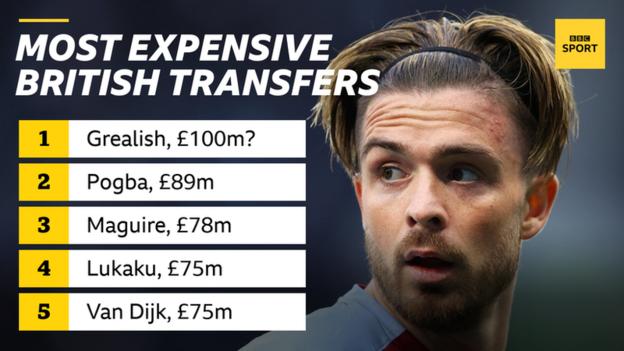 His ability on the ball has made him a firm fans’ favourite, which crossed over to England this summer, when many felt he was underused by Gareth Southgate.

It was expected Grealish would have talks with his club about his future when he started pre-season training with Villa following his England duty at Euro 2020.

City knew the fee Villa were likely to want for their playmaker and lifelong Villa fan – and remained undeterred in their pursuit. There was confidence from within the Etihad club earlier this week they would complete the deal this summer.

Tottenham striker and Grealish’s England team-mate Harry Kane has also been closely linked with a move to the Etihad Stadium after he made it clear he wanted to leave Spurs this summer.

If City do land Grealish for £100m it will make him the ninth most expensive player in history.

Only eight players have ever demanded a transfer fee of £100m or more.