Manchester City moved five points clear at the top of the Premier League after beating Liverpool 4-1.

Bottom club Sheffield United lost 2-1 to Chelsea while fellow strugglers West Brom went down 2-0 at Tottenham and Newcastle held on with nine men to edge Southampton 3-2.

Check out my team of the week and then make your own selections towards the bottom of the article. 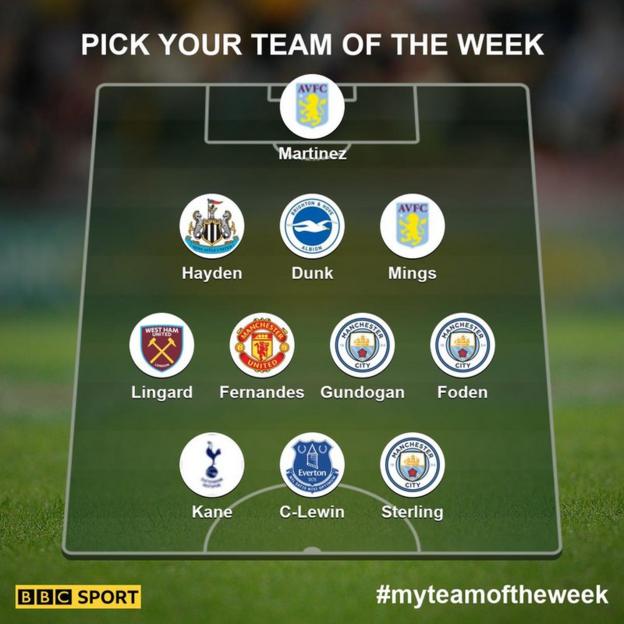 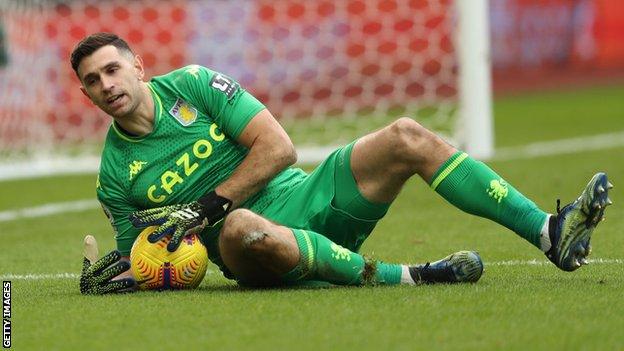 Martinez: The free-kick from Arsenal’s Granit Xhaka was always going to be dangerous. Martinez had seen his former team-mate convert them from this distance before. But the Aston Villa goalkeeper’s save was excellent. Martinez had a fair way to travel to get to the shot, which was heading for the top right-hand corner, but moved his feet brilliantly to get to the ball.

The Argentine has been outstanding for Villa this season, with the exception of the recent game against West Ham, when I thought he might have done a little better. Nevertheless, Liverpool’s Alisson has shown that even the best goalkeepers can have bad days.

Did you know? Martinez became the third goalkeeper to keep a clean sheet in his first two Premier League appearances against a club he has previously appeared for in the competition – after Shaka Hislop versus Newcastle (1998-99) and Mark Schwarzer against Middlesbrough (2008-09). 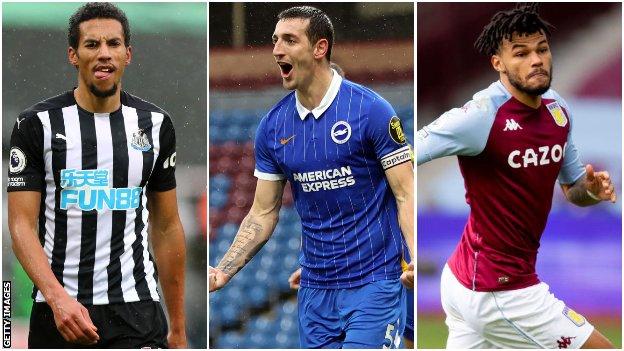 Hayden: For me, Newcastle’s 3-2 win against Southampton on Saturday was the match of the day. The conditions became progressively worse but the quality of football under the circumstances was just tremendous.

Newcastle played with 10 men for half-an-hour and nine men for 18 minutes – including seven minutes of stoppage time – but miraculously held on for three points.

Isaac Hayden was magnificent in the last 20 minutes of this fixture. His clearance off the line from a Danny Ings sliced shot was outstanding. His ability to sense the danger and hold off the Saints bombardment was quite brilliant.

Did you know? Hayden has now played more Premier League games against Southampton without ever losing than he has against any other side in the competition (P5 W4 D1 L0).

Dunk: You can’t go for very long talking about any kind of Brighton success without mentioning the name of Lewis Dunk. Against Liverpool his defending, or should I say blocking of shots, was once again magnificent, as Brighton secured their first victory at Anfield since 1983.

Three days later, the Seagulls returned to the north-west of England and proceeded to play Burnley off the park. Dunk scored a terrific header but his team only left with a point. It didn’t do justice to Brighton’s performance – or that of their captain.

Did you know? Since Brighton were promoted in 2017, Dunk has scored nine Premier League goals, a figure only three other defenders can better (Marcos Alonso 14, Patrick van Aanholt 11, Virgil van Dijk 10).

Mings: Aston Villa were run ragged by West Ham in midweek but recovered well against an Arsenal side who lacked cutting edge. I know Nicolas Pepe scored against Wolves last week but can Arsenal really afford to leave someone of Pierre-Emerick Aubameyang’s class on the bench? I don’t think so.

Having got his team back on track with some decent results, Mikel Arteta’s meddling again. Meanwhile, Tyrone Mings played a masterful role in organising his troops and keeping the Gunners at bay.

Did you know? Mings made six clearances against Arsenal – only Ezri Konsa made more in the match (10). 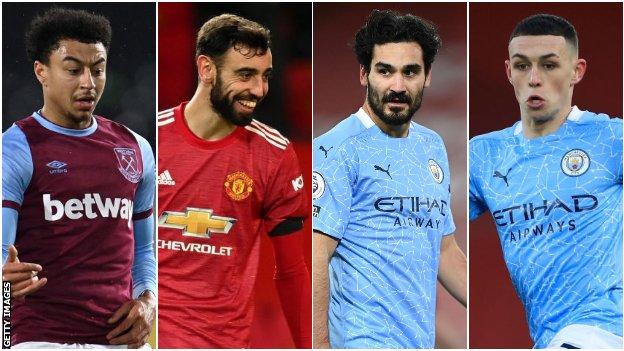 Lingard: What a statement of intent West Ham’s loan signing from Manchester United has made. His goals against Aston Villa were well taken but his performance was quite revealing. He may be surplus to requirements at Old Trafford, but given how little first-team football he has played this season, Lingard has certainly kept himself in good shape. He couldn’t have had such an impactful match at Villa if he hadn’t.

His performance against Fulham a few days later was a further indication of his focus. To have such an influence on a new team so soon says volumes for the lad and flies in the face of his critics.

The big question is – can he keep it up?

Did you know? Despite this being just his second Premier League appearance of the season, Lingard covered 11.26km for West Ham against Fulham – only Tomas Soucek covered more distance for the Hammers on Saturday (11.47 km).

Fernandes: It seems almost inconceivable that Bruno Fernandes could be part of a team that scored nine goals against Southampton and only get one for himself. It simply doesn’t reflect the sort of form he has been in this season.

His goal against Everton was much more like the ones we are used to from the Portugal international. What a pity United’s defensive frailties have yet again hampered their ability to take advantage of the team’s – and in particular Fernandes’ – tremendous firepower to gather wins.

No team can be expected to win the title if they have to score four goals to win a match.

Gundogan: Against an outclassed Burnley, the movement by Manchester City’s Ilkay Gundogan was brilliant – while his ball for Raheem Sterling to score was even better.

A few days later, City went to Anfield and took the champions apart. Having missed a penalty in a game of such importance, the Germany international simply upped his game and instigated the best City performance at Liverpool for years.

Manchester City are on top of the league and look like a team who have found their appetite for titles again.

Foden: I have selected Phil Foden in my team of the week but I must confess I do not see him being ahead of Jack Grealish, James Maddison or Mason Mount. He is undoubtedly talented but at Manchester City, he is surrounded by better, more gifted players. How can he not flourish – he’s already gifted.

At the moment Foden, as was the case against Liverpool, puts the finishing touches to fine team performances, leaving the grown-ups such as Gundogan and Sterling and De Bruyne – when fit – to break the bow of the opposition. He’s young and has time but he’s not ready to take over from the adults just yet.

Did you know? Of all players to score at least 10 goals across all competitions within the top five European leagues this season, only Erling Braut Haaland (20 years and 201 days) is at a younger age than Manchester City’s Phil Foden (20 years and 255 days). 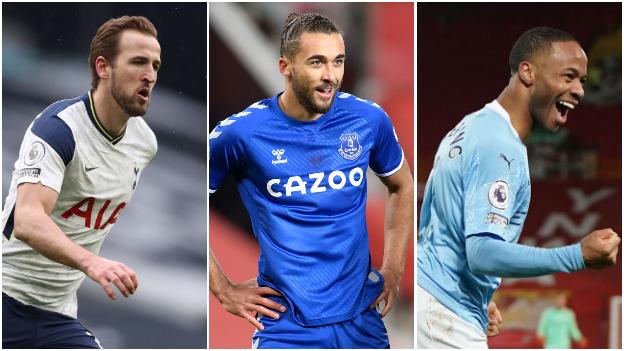 Kane: As much as I would like to say it wasn’t so, Tottenham are in danger of becoming known as a one-man team. When Kane is in the side, Tottenham look a different proposition. His team-mates know it, the opposition know it and the manager knows it. Son Heung-min is a top-class player but even he has looked lost without his co-striker.

Kane looked a little rusty on his return to action against West Brom but took his goal as if he was playing for his country. It was the perfect way to reintroduce the England captain and just in time for the FA Cup fifth round. Spurs can’t afford to lose him for any length of time.

Calvert-Lewin: He may have scored his 17th club goal of the season against Manchester United – but until last Wednesday, when he scored at Leeds, Dominic Calvert-Lewin had been going through a mini-barren spell in the Premier League.

The Everton striker scored the decisive goal at Elland Road and salvaged a point in the final seconds at Old Trafford. What a dent it was to Manchester United’s title challenge. Ole Gunnar Solskjaer’s face at the end of the match was a picture of shock.

Did you know? Only Mohamed Salah (16) has scored more Premier League goals than Dominic Calvert-Lewin this season (13).

Sterling: It was no coincidence that in the absence of Liverpool supporters, and with the intimidation factor removed, Raheem Sterling had arguably his best game at Anfield since his departure to Manchester City. Quite apart from running Trent Alexander-Arnold ragged, he forced Fabinho to give away a penalty, scored City’s third goal and reminded everyone why he left Liverpool for Manchester City in the first place.

It wasn’t only about winning trophies, although the Premier League title is almost certainly heading back in the hands of Sterling and his team-mates, but also about becoming a better player. He’s certainly done that and now wears the captain’s armband to prove it.

Did you know? Sterling is only the third player to score 100-plus goals in all competitions under Pep Guardiola in his top-flight managerial career, after Lionel Messi (211) and Sergio Aguero (120).

The Crooks of the Matter

The game is in crisis. Mohamed Salah’s open admission, after his two goals at West Ham in late January, that he does not like VAR is a massive indicator of what is being discussed in dressing rooms throughout the Premier League. His Liverpool captain Jordan Henderson has also disapproved publicly of the way the technology is being used.

However, the dismissal of Southampton’s Jan Bednarek at Manchester United, followed days later by the sending off of West Ham’s Tomas Soucek at Fulham by the same referee, can only be described as incompetence on an unrivalled level.

VAR was sold to the football public as something to assist the officials in their decision making, not make it more difficult.

Yet replays on Match of the Day clearly highlighted that neither Soucek nor Bednarek should have been sent off. VAR insists that its evidence is conclusive but it is so poorly interpreted by Mike Dean, and some of his colleagues, that it has put the game on a collision course with players and fans.

Fortunately, common sense prevailed when both Soucek and Bednarek’s red cards were rescinded on appeal.