Celtic were desperate for some positivity after a torrid few months. Christopher Jullien testing positive for coronavirus, thereby decimating the squad, wasn’t quite what they had in mind.

More than a week after returning from their controversial Dubai training camp, the fallout continues to be keenly felt by the Scottish champions.

A belated apology to supporters from chief executive Peter Lawwell marked an attempt to draw a line under the episode, but has done little to quell fans’ anger.

So where does the latest sequence of events leave the club and manager Neil Lennon?

From champions to a battle for second?

Having arrived back from Dubai on Friday, Celtic soon found themselves in the eye of a storm. On Sunday they reported a player – later confirmed as injured defender Jullien – had contracted coronavirus. And on Monday a further 13 squad members as well as Lennon and his assistant Kennedy were told to quarantine.

Yet thanks to David Turnbull’s sublime free-kick the champions’ depleted side were just three minutes away from victory over Hibs on Monday evening before familiar flaws resurfaced and a poorly defended set-piece cost an injury-time equaliser.

Another stalemate followed on Saturday, this time with a listless performance against Livingston, to leave Celtic still searching for their first win of 2021. Any lingering hope of resuscitating their bid to become the first Scottish club to win 10 successive titles has long since faded. Celtic’s deficit on Rangers is now 20 points, or 22 considering their vastly inferior goal difference, albeit with two games in hand. Even the most optimistic Celtic fan is resigned to the trophy changing hands.

And as Rangers disappear into the distance, should Lennon’s men now be more concerned with looking over their shoulder? Celtic are five points clear of Hibs and six above Aberdeen, having played fewer matches than both, but their inconsistency this season gives rivals hope.

“Celtic’s season has unravelled so badly that it’s now got to the situation where they need to concentrate on second spot,” says former Hibs, Hearts and Scotland midfielder Michael Stewart.

“Hibs and Aberdeen are not a million miles away. And if Celtic don’t start getting points on the board to build confidence then you can seriously start to question if they are in for a challenge for second.

“That’s how bad the season is becoming for Celtic.” 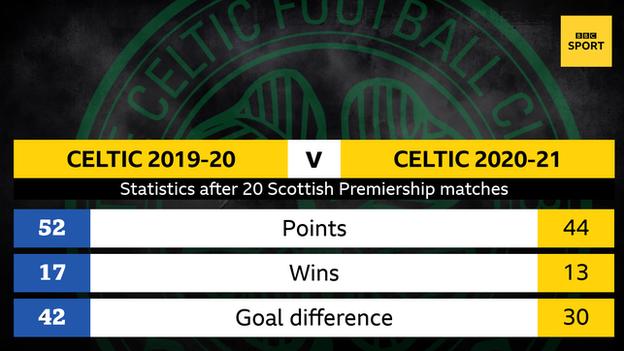 Celtic’s current instability isn’t confined to the pitch. Manager Lennon – who has been stuck in quarantine and handed the reins to coach Gavin Strachan for the last two games – remains in a vulnerable position.

Lennon has spent the last few months battling to stay in the job in the eyes of many fans, and his future looks no clearer. Exits from two European competitions and the Scottish League Cup, plus trailing in the title race, prompted the board to publicly backed the manager in early December after an alarming run of two wins in 12.

Lennon restored some calm with six straight victories – including winning the quadruple treble – but that has been shattered by the chaotic start to 2021.

And the board’s support came with the caveat that “progress will be reviewed in the new year”. Halfway through January, there has been no message from the hierarchy over whether they intend to stick or twist.

That uncertainty is doing the club no favours, according to former Celtic goalkeeper Pat Bonner.

“They’ve got to make big decisions very quickly now,” says Bonner. “If they back Lennon, are they doing so for the next two years? Or will they make a change in the summer? That’s the dilemma they have.

“Lennon has done wonders for the club as a player and manager, but time runs out on you, especially if you end up so far behind Rangers.”

Stewart, meanwhile, believes “it’s only a matter of time” until Celtic remove Lennon from his role.

“I get the feeling the change wasn’t made in October-November because they couldn’t find somebody to come in,” he adds.

The last thing Celtic need is to face a team absolutely flying in the Premiership. But that’s what they’ve got – twice – with home and away meetings with Livingston.

Having battled to an unconvincing home point on Saturday, ending David Martindale’s eight-game winning start as head coach, they face the Lions again on Wednesday.

Celtic’s self-isolating players and management will be back for that one. But with the players having been confined to their houses during isolation, their fitness will have inevitably been affected.

Livingston’s run of victories may have ended, but there was no inferiority complex as they pinned Celtic back for long spells in Glasgow’s East End. Now the sides go again at a venue where that has become a treacherous trip for the Parkhead club.

Since Livingston’s return to the top flight, Celtic have yet to record a victory at the Tony Macaroni arena in three attempts. Last season they lost their first visit 2-0 then scrambled a 2-2 draw with a last-minute equaliser in March.

Under Martindale – the Premiership manager of the month for December – Livingston have conceded just two goals in seven league games, while scoring 14, and the novice head coach aims to make the most of his second crack at the champions.

“We were unfortunate not to get three points on Saturday,” said Martindale. “I’m a bit disappointed but not surprised because this was still a very good Celtic team.

“Hopefully we can make it even more difficult for them on Wednesday.”

Celtic’s hopes will again rely on the brilliance of 21-year-old Turnbull, the £3.25m summer recruit from Motherwell who has become indispensable since forcing his way into the first tea